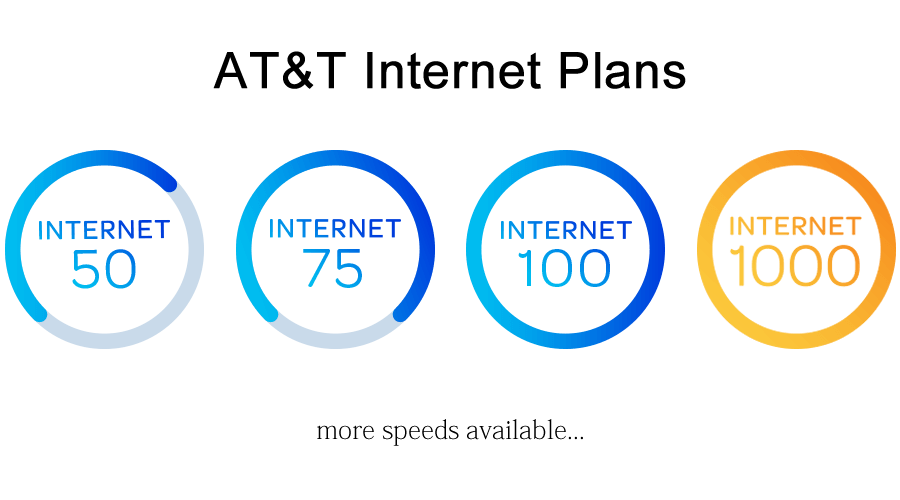 AT&T offers high-speed internet connections, along with satellite and Internet based TV (DIRECTV and U-verse TV), home phone, cell phone, and others services to tens of millions of its existing and potential customers. The company uses fiber-optic and DSL internet connections that are known for impressive speeds. You can download large 1GB files in less than 9 seconds if you’re using the 1000 Mbps fiber connection.

When it comes to AT&T’s Internet connections, the average speeds are quite consistent according to Broadbandnow.com. They tested the connections of more than 17 million AT&T customers to come up with their statistics. The average speeds in the fastest cities fall between 75 Mbps and 800 Mbps.

The internet plans have a data cap of 1TB every month, which should be enough for any family. You would have to download about 140 videos every day to use that up. The top 1000 Mbps plan has unlimited data. Bundling AT&T Internet and TV also includes unlimited data ($30/month value).

There is a reason why AT&T is second in customer satisfaction, according to the 2018 ACSI Telecommunications Report. They couldn’t have had so many satisfied customers without a reliable and fast Internet service connection. AT&T even upgraded their DSL internet speeds from 50 Mbps to 100 Mbps in recent years.

Regardless, it’s important to mention AT&T Internet Speeds in the context of pricing tiers.

AT&T’s fiber connection is ultra-fast, letting you access content at never before seen speeds. For example, a 1000 Mbps connection allows you to download a 90-minute HD film in about 30 seconds and upload 25 images in one second. Reportedly, AT&T Fiber’s speed usually goes up to 940 Mbps. It’d be safe to say that the majority of users wouldn’t notice the difference.

Loading anything with a fiber connection is near instantaneous. You can download an entire TV show in less than 30 seconds even with the most basic fiber plan.

There are four different plans offering the following speeds:

In some instances, lower speeds may be available in the 100% fiber form, like 50 Mbps.

The first two come at a quite reasonable price, but have a data cap of 1TB. Even so, you’ll have to watch more than 5 hours of Netflix or 350 hours of HD video every day to deplete it. Third one, 500 Mbps, is closer to highest priced plan, and offered in case if 1000 Mbps is not available.

Finally, the 1000 Mbps plan has unlimited data usage, so you can explore high-quality content freely, even keep it playing while your sleep. Fiber connections are available in a select number of states and cities. You can find out whether your city has fiber coverage by checking the availability of AT&T Internet service in your area. The coverage area expands constantly, so don’t hesitate to check back if it’s not currently available in your area.

The reality is, any connection above 25 Mbps is enough for a moderate internet user. It’s perfect for streaming video and browsing online. So, if you fall into the “average internet user” category, consider this and the number of devices in your home. Nonetheless, if you’re going to download a lot of content, faster is always better.

For online gamers, latency is extremely important. AT&T Internet is well-suited for gaming according to the company’s broadband report. They measured fixed broadband and concluded that the latency for DSL users is 28.12ms and 31.20ms for broadband users.

The costs of AT&T’s Internet plans are on par with other providers in the country. However, they can be much cheaper in the long run. That is mainly because, for lower plans, AT&T asks for a one-time setup fee, while waiving them for higher plans. Other providers charge that on a monthly basis.

Its fiber optic plans are of the same price as the DSL plans for same speeds. Both AT&T’s fiber and DSL plans tend to be more economical than competing fiber and cable internet services in the county. The AT&T internet services really begin to shine when they are paired with satellite TV and home telephone services. With AT&T’s bundles, you can get some amazing deals that include all of their home services.

By opting for a DIRECTV package, you can enjoy unlimited data and minutes, a internet connection (of varying speed), and 155 to 330 satellite channels.

One of AT&T’s strong suits is the people working for it. They are known for excellent customer support. Even the American Customer Satisfaction Index mentions that AT&T takes good care of their customers.

Just keep in mind that every telecom company will put you on hold for a few minutes when you call them. It’s a good time to make sure you have all verification info handy, particularly your account details.