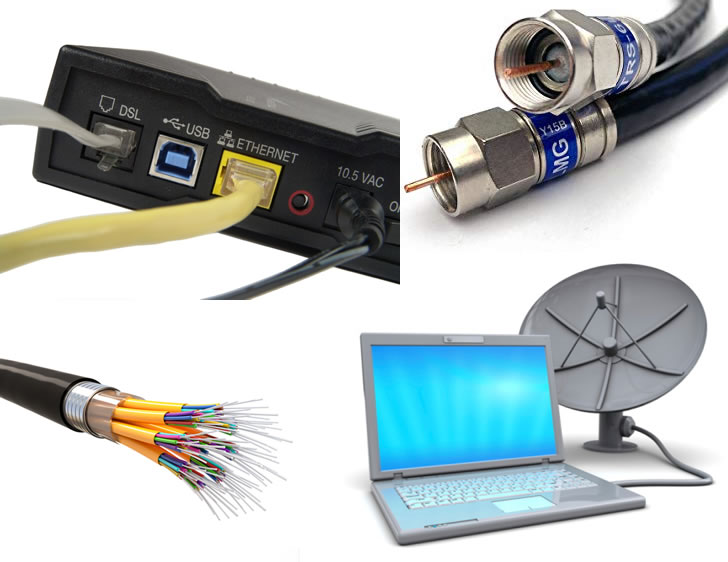 When the Internet first showed up, it was hard to imagine that it would offer the tremendous possibilities that it does today. Broadband Internet is the exact reason why everything we do online is possible.

If you haven’t gone a bit deeper into Internet terminology, you might not understand what it actually means. Well, you’ll find all the answers you’re looking for further below.

What Is Broadband Internet?

Unless you’re still using dial-up, you have a broadband internet connection. ‘Broadband’ is an umbrella term that is synonymous with high-speed internet and encompasses many different types of it. In the most literal sense, it means that the bandwidth is broad enough to ensure the transfer of large amounts of data.

Broadband connection comes in different shapes and sizes. Its speed varies according to the technology used to transfer data, so let’s take a look at what they are.

Digital Subscriber Line (DSL) is the most primitive version of broadband. It’s the first time broadband was used to describe a high-speed internet connection.

Even though it’s still considered high-speed internet, it’s anything but, at least in comparison to other broadband types. The main reason for this is that it uses twisted pair cables for data transfer. These cables usually offer low bandwidth, which is why you can’t expect great internet speeds.

Many major ISPs still offer DSL connection. Frontier is a good example, since they use augmented cables to provide a faster connection. Still, the highest speed you can expect on average is around 18 Mbps. If you live in metropolitan areas and are in close proximity to a DSL hub, the speed might be higher but it’s still going to be much lower than what other technologies offer.

This is currently the most commonly used broadband internet. It uses coaxial cables to transfer data, which is the same cable used for delivering TV signals.

These high-frequency cables depend on one solid-copper core (the actual cable includes shielding, jacket, and stuff). They can have up to 80x higher speed than DSL’s twisted pair cables. They also provide a much more stable connection and do a great job of protecting the signals from interference.

Of course, this also means that they’re a bit more expensive. Still, you can find some affordable options with providers like Comcast XFINITY, Charter Spectrum, or Cox Communications. Since cable TV and internet often come bundled, you can get both for a fair price.

As far as the speed goes, you can expect up to 100 Mbps. This is more than enough to ensure uninterrupted streaming and gaming in most cases.

The biggest drawback of cable connection is that it’s shared, unlike DSL. Each geographical area shares a certain bandwidth, which means that the actual connection speed can vary according to the number of users connected to the network.

Despite this, cable connection is stable enough to make sure you won’t experience any lag while streaming media or using programs that rely heavily on a high-speed connection.

Fiber optic cables are the most advanced broadband type. Instead of electrical impulses, data is transmitted via light. The first and foremost advantage is an extremely fast connection commonly going up to 1 Gbps. There’s pretty much nothing that an average user can’t do with this kind of speed, so it’s considered the golden standard.

Another big advantage is superior protection from interference. Each fiber is plastic-coated and placed in a protective tube. This ensures a very reliable connection that doesn’t get interrupted easily.

AT&T Fiber and Verizon’s Fios are good examples. It is capable of up to 940 Mbps download speed and 880 Mbps upload speed. Of course, this option is much more expensive than cable connection, but it might be worth it to those that need lightning-fast broadband internet.

Lastly, broadband can come in the form of satellite connection. Today, it’s one of the least common choices, mainly because it’s rather expensive and not as capable as cable or fiber optic connection.

Viasat is one of the leading satellite ISPs. It starts at a speed of 30 Mbps (and up to 100 Mbps in certain areas), but prices comparable to fiber optic internet.

So why would someone want this type of connection? Living in rural areas is one of the main reasons. If there are no other options available, satellite connection might have to do.

30 Mbps isn’t that bad on its own. It should let you stream 720p videos without issues and play some less-demanding online video games. The main issue is that the connection can be very unstable. It can be affected by weather, minor obstructions, and many other factors that are outside of your control. For this reason, many people steer away from satellite broadband.

Which Type Is for You?

The first thing to take into consideration is your primary use of the internet. If you’re not doing anything other than browsing the web and exchanging emails, DSL might be good enough, but only if your home is within 18,000ft of the hub.
On the other hand, if you use programs that are dependent on a stable and fast connection, cable or fiber optics might be your safest bet. Keep in mind that fiber optics might be a bit of an overkill for some, so make sure to estimate your ideal connection speed.

Of course, you’ll also want to take your budget into account. This is where cable connection can offer the best value. If you want good internet speed but can’t afford fiber optics, it may be the best broadband solution. And if you’re really on a budget, you can think about DSL.

Hopefully, you now have a better understanding of what broadband actually means. As you can see, there are many options to choose from, so educating yourself on the matter is a good idea.

In the future, we can expect broadband to become even faster than it currently is. Telecommunications companies are currently improving both cable and fiber optic solutions to make high-speed internet even more accessible.